The Burj Khalifa is a sight to behold. It reigns supreme as the world’s tallest building. Now, imagine staying at one of the Rove hotels with Burj Khalia view and waking up to a view of this icon from your hotel window. With Rove Downtown, you can – and it won’t cost you a fortune.

The Burj Khalifa took 6 years to construct, totalling a whopping 22 million hours of work. Today, it remains one of the city’s most visited icons and one of the world’s most photographed buildings. It’s so tall, in fact, that you’ll be able to spot it in the skyline from as far as 95 km away. 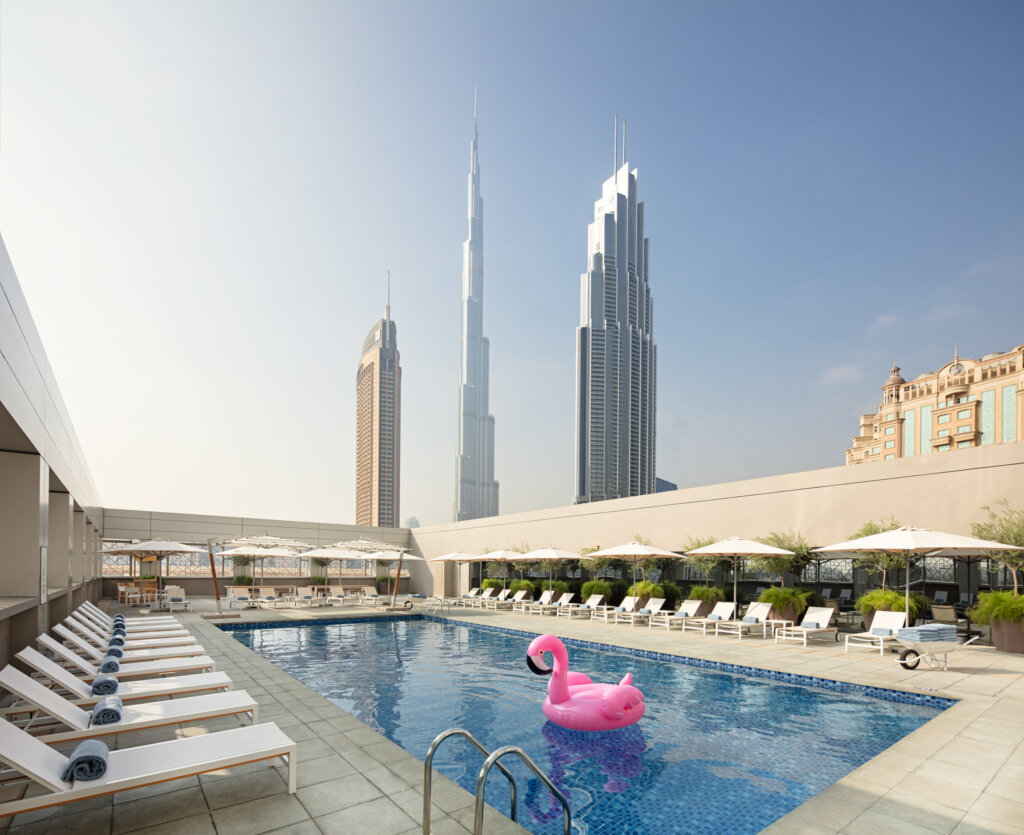 The mighty Burj Khalifa stands tall as a representative of the innovation that exists within Dubai. Its design is inspired by the Hymenocallis (Spider Lily) flower found near the desert to showcase the roots of the city. Its Islamic architecture is seen throughout the building, which reflects the prevailing culture and religion of the Emirate’s.

You can visit during the day or night. At nighttime, the geometrical elements of the building are clearly visible with lighting and shadow plays, something you’ll want to see in person (or from your hotel room)! Be sure to see if you can spot the telescopic spire that sits at the top of the building.

The 828 metre-high building itself serves multiple purposes, with two viewing decks that feature panoramic views of the city. You can also make a reservation at one of the restaurants that call the Burj home, all of which feature epic vistas.

Inside, you can feast your eyes on over 1,000 artworks that have been commissioned by Emaar in a mix of Middle Eastern and international works. This forms part of the spirit of harmony and linking cultures which is reflected in the building itself, as it was brought to life in a global collaborative effort.

Hotel in Downtown Dubai with a view of Burj Khalifa

Rove Downtown is one of the trendy hotels with Burj Khalifa view and is situated just minutes away from the towering skyscraper. You’ll be treated to views of it from your Rover Room. You’ll also be a stroll away from The Dubai Mall and Dubai Fountain, so you can tick off multiple wishlist attractions to visit in the city, situated right on the doorstep of your accommodation. Heading further afield to explore the rest of the city is easy too, with a metro station just moments away. 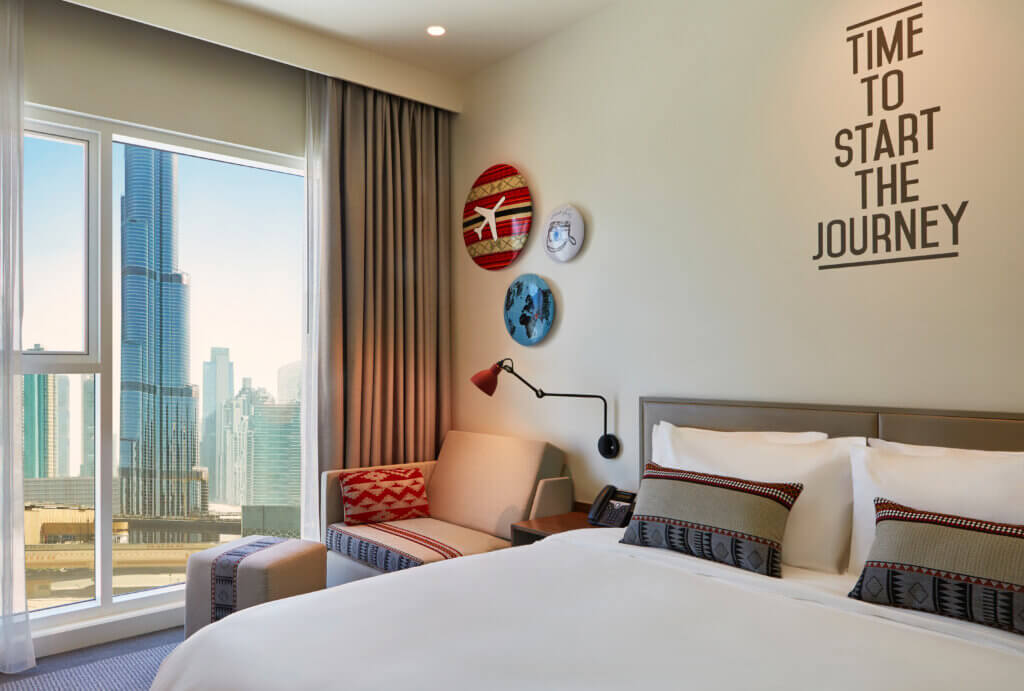 Rove hotels are designed to fulfill all the comforts and conveniences of modern-day travellers. After a day of adventure enjoyed in the city, you’ll have a comfy bed to return to for some shut eye. When you wake, enjoy coffee or tea in your room and join us for breakfast at our restaurant, TGI Fridays. We also have an outdoor pool on the rooftop where you can lounge and swim, plus co-working stations and a 24-hour gym.

Book your stay at one of the Burj Khalifa view hotels when you choose Rove Downtown.

You can access the Burj Khalifa by getting tickets to At The Top or going for a meal to At.Mosphere, the restaurant located in the tower.

Submit Your Work To The Emerging Artists Prize 2023

World Art Dubai, the region’s largest contemporary retail art fair, and Rove Hotels, the official hospitality partner of the event, have joined forces to support local talent once again through their hotly anticipated Emerging Visual Artist Prize. If you are an up-and-coming artist looking for an opportunity to exhibit your art, this is your chance. […]

So little time, so much to do! Dubai has so much to offer avid travellers trotting the globe from all corners of the earth, and believe it or not, it’s possible to tick off most (if not all!) of your bucket list items when you stay at Rove Hotels with late check-outs and bag drop-offs.

How to Plan Your Trip to Dubai

Stay at Rove Hotels during your next international trip to Dubai. Here's everything you need to know when planning your trip to this vibrant metropolis is buzzing with thrilling activities, world record-breaking attractions, awe-inspiring natural attractions, and everything in between.

Dubai is one of the most popular places on holiday wish lists. With nine hotels situated throughout the city, Rove is the perfect base for a vacation in Dubai that is sure to surpass your wildest dreams.

Bur Dubai is a historical district in Dubai with a lot to explore when visiting, from exploring the Emirati culture to feasting on traditional dishes. If you’re looking for cheap rates at hotels close to this wonder-world, look no further than Rove Healthcare City.